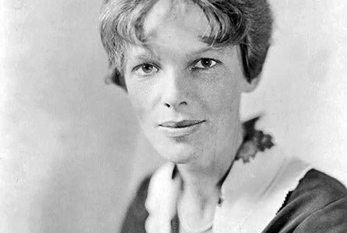 Amelia Earhart Day is celebrated on July 24, 2023. Amelia Mary Earhart (July 24, 1897 - disappeared July 2, 1937) was an American aviation pioneer and author. Earhart was the first aviatrix (female pilot) to fly solo across the Atlantic Ocean. She received the U.S. Distinguished Flying Cross for this record. She set many other records, wrote best-selling books about her flying experiences and was instrumental in the formation of The Ninety-Nines, an organization for female pilots.

During an attempt to make a circumnavigational flight of the globe in 1937 in a Purdue-funded Lockheed Model 10 Electra, Earhart disappeared over the central Pacific Ocean near Howland Island. Fascination with her life, career and disappearance continues to this day.

Earhart was a widely known international celebrity during her lifetime. Her shyly charismatic appeal, independence, persistence, coolness under pressure, courage and goal-oriented career along with the circumstances of her disappearance at a comparatively early age have driven her lasting fame in popular culture. Hundreds of articles and scores of books have been written about her life which is often cited as a motivational tale, especially for girls. Earhart is generally regarded as a feminist icon.

Earhart's accomplishments in aviation inspired a generation of female aviators, including the more than 1,000 women pilots of the Women Airforce Service Pilots (WASP) who ferried military aircraft, towed gliders, flew target practice aircraft, and served as transport pilots during World War II. (With material from: Wikipedia)