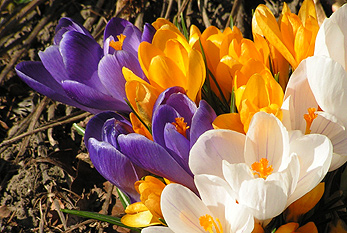 Beginning of spring is a time when only the hardiest flowers like the crocus are in bloom.
Copyright: Benjamin Gimmel. License: GNU FDL.

In meteorology for the Northern hemisphere, spring begins on March 01, 2023. It is also called the beginning of meteorological spring. The meteorological seasons are divided according to the calendar months. Spring months are March, April and May.

Spring is one of the four conventional temperate seasons following winter and preceding summer. Spring is seen as a time of growth, renewal, of new life (both plant and animal) being born. The term is also used more generally as a metaphor for the start of better times, as in the Prague Spring.

Unstable weather may more often occur during spring, when warm air begins on occasions to invade from lower latitudes, while cold air is still pushing on occasions from the Polar regions.(With material from: Wikipedia)