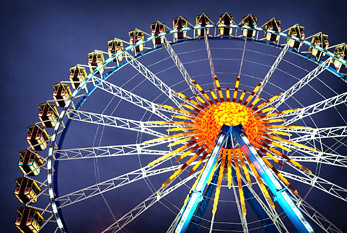 Ferris Wheel Day is observed on February 14, 2023. It celebrates the birthday of George Washington Gale Ferris, Jr. He was a civil engineer who made the first Ferris Wheel. The original Ferris Wheel, sometimes also referred to as the Chicago Wheel, was designed and constructed as a landmark for the 1893 World's Columbian Exposition in Chicago. The term Ferris wheel is used generically for all such structures, which are now the most common type of carnival ride at state fairs in the US.