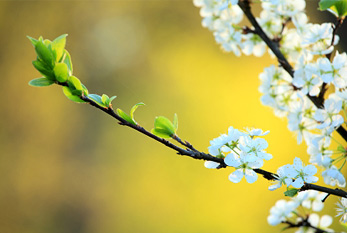 The first day of Spring is in 2021 on March 20 (according to the astronomical definition). It is also called the spring quinox. Spring is one of the four temperate seasons, the transition period between winter and summer. Spring and "springtime" refer to the season, and broadly to ideas of rebirth, renewal and regrowth.

The specific definition of the exact timing of "spring" varies according to local climate, cultures and customs. At the spring equinox or the first day of spring, days are close to 12 hours long with day length increasing as the season progresses.

In spring, the axis of the Earth is increasing its tilt toward the Sun and the length of daylight rapidly increases for the relevant hemisphere. The hemisphere begins to warm significantly causing new plant growth to "spring forth," giving the season its name. Snow, if a normal part of winter, begins to melt, and streams swell with runoff. Frosts, if a normal part of winter, become less severe.

Unstable weather may more often occur during spring, when warm air begins on occasions to invade from lower latitudes, while cold air is still pushing on occasions from the Polar regions. Flooding is also most common in and near mountainous areas during this time of year because of snowmelt, accelerated by warm rains. (With material from: Wikipedia)

Note: The date March 20, 2021 is calculated for Eastern Standard Time (UTC-5). It can vary in other time zones.