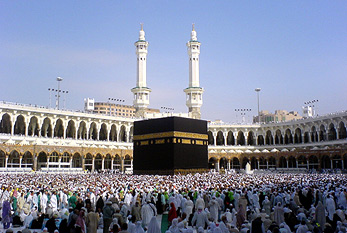 The annual Islamic pilgrimage to Mecca, the Hajj, approximately takes place between August 19, 2018 and August 24, 2018. This duty for Muslims has to be carried out at least once in their lifetime, as long as they are physically able to take this journey and afford it.

The Hajj is one of the five pillars of Islam, demonstrating the solidarity of the Muslim people as well as their submission to Allah. The other four pillars are these submissions to God, fasting while Ramadan, the daily prayers, and the alms tax. The pilgrims are not allowed to cut hair or nails during Hajj. Also the use of scented products, arguing, smoking and having sex are forbidden. This state of consecration is called Ihram.

Every year more than two million Muslims from around the world participate in the pilgrimage to the Saudi Arabian Mecca. Around the city is a sacred area, which may not be entered by non-Muslims. In addition to the hajj, which as the great pilgrimage that is tied to specific data, Muslims can also take a small pilgrimage called Umrah round the year.