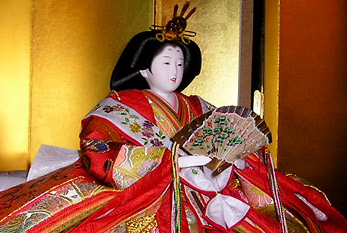 Hinamatsuri takes place on March 03, 2023. Hinamatsuri is also called the Japanese Doll Festival or Girls' Day. Platforms covered with a red carpet are used to display a set of ornamental dolls representing the Emperor, Empress, attendants, and musicians in traditional court dress of the Heian period.

The custom of displaying dolls began during the Heian period. Formerly, people believed the dolls possessed the power to contain bad spirits. Hinamatsuri traces its origins to an ancient Japanese custom called hina-nagashi, in which straw hina dolls are set afloat on a boat and sent down a river to the sea, supposedly taking troubles or bad spirits with them. The Shimogamo Shrine celebrates the Nagashibina by floating these dolls between the Takano and Kamo Rivers to pray for the safety of children. People have stopped doing this now because of fishermen catching the dolls in their nets

Families generally start to display the dolls in February and take them down immediately after the festival. Superstition says that leaving the dolls past March 4 will result in a late marriage for the daughter. (With material from: Wikipedia)