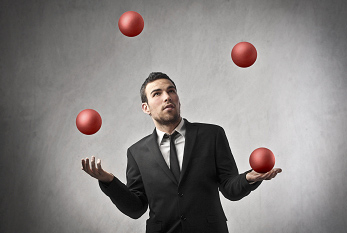 International Juggler's Day takes place on April 18, 2023. The day celebrates the skill of juggling and talented jugglers. Juggling is a physical skill involving the manipulation of objects for recreation, entertainment or sport. The most recognizable form of juggling is toss juggling.

Juggling can be the manipulation of one object or many objects at the same time, using one or many hands. Jugglers often refer to the objects they juggle as props. The most common props are balls or clubs or rings. Some jugglers use more dramatic objects such as knives, fire torches or chainsaws. (With material from: Wikipedia)