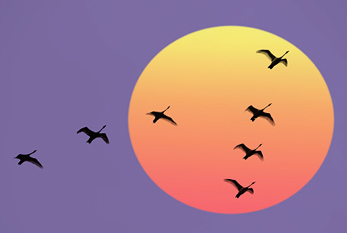 Bird migration is the regular seasonal movement, often north and south along a flyway between breeding and wintering grounds, undertaken by many species of birds. The timing of migration is controlled primarily by changes in day length. Migrating birds navigate using celestial cues from the sun and stars, the earth's magnetic field, and probably also mental maps. Human activities have threatened many migratory bird species.

The distances involved in bird migration mean that they often cross political boundaries of countries and conservation measures require international cooperation. Hunting along the migratory route can take a heavy toll. Structures such as power lines, wind farms and offshore oil-rigs have also been known to affect migratory birds.

Habitat destruction by land use changes is the biggest threat, and shallow wetlands that are stopover and wintering sites for migratory birds are particularly threatened by draining and reclamation for human use. (With material from: Wikipedia)