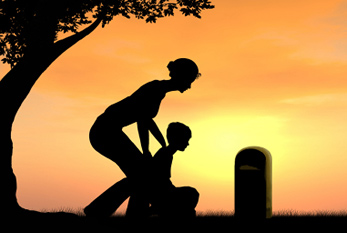 Widow with her child on the husband's grave
Copyright: kim258, license: iStockphoto

On June 23, 2023 the United Nations raise awareness on the troubles of widowed women with the International Widows Day. Especially in India women whose husbands are dead have to suffer complete social exclusion. Although it is not their fault that they lost their husbands, they lose the respect of those around them. Many of them have to live on the streets and suffer of hunger - the only escape would be suicide by have themselves burned alive together with their dead husband. If they do that they will be considered godlike.

UN General Secretary Ban Ki-Moon claims a humiliation of the human rights as long as women lose all their goods and social status because of their husbands pass away. Many of them also become victims of discrimination and abuse. In many western countries widows are more secured by for example a dependent’s pension or often have their own income anyway. Normally they would also get peoples sympathy if their husband dies instead of discrimination. Since 2011 International Widows Day is an awareness day for this imbalance and aims to sensitize the global population for the misery of the widows.