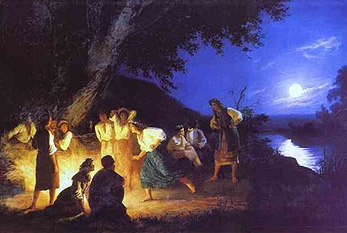 Kupala Night is celebrated on June 23, 2023. Kupala Night or Ivan Kupala Day is celebrated in Ukraine, Belarus, Poland and Russia currently on the night of 23/24 June in the Gregorian calendar. The celebration relates to the summer solstice when nights are the shortest and includes a number of fascinating Pagan rituals.

The holiday is still enthusiastically celebrated by the younger people of the Eastern Europe. The night preceding the holiday (Tvorila night) is considered the night for "good humour" mischiefs. On Ivan Kupala day itself, children are engaged in water fights and perform pranks mostly involving pouring water over someone. (With material from: Wikipedia)