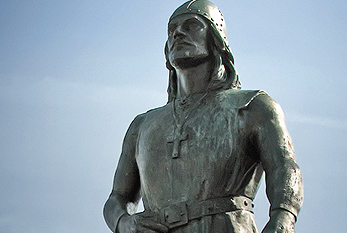 Leif Erikson Day is an annual American observance occurring in 2022 on October 9. It honors Leif Ericson, the Norse explorer who brought the first Europeans known to have set foot in North America. In the U.S. the day is also used as a holiday to swim and imitate Vikings. October 9th is not associated with any particular event in Leif Erikson's life. The date was chosen because the ship Restauration coming from Stavanger, Norway, arrived in New York Harbor on October 9, 1825 at the start of the first organized immigration from Norway to the United States