Look for an Evergreen Day 2022 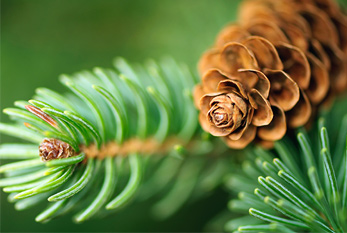 A Christmas tree is a decorated evergreen conifer such as spruce, pine or fir, traditionally associated with the celebration of Christmas. The tree was traditionally decorated with edibles such as apples, nuts or other foods. In the 18th century, it began to be illuminated by candles, which with electrification could also be replaced by Christmas lights. Today, there are a wide variety of traditional ornaments, such as garland, tinsel, and candy canes.

Traditionally, Christmas trees were not brought in and decorated until Christmas Eve. In many areas, it has become customary to set up one's Christmas tree at the beginning of the Advent season. Some families in the U.S. and Canada will put up a Christmas tree soon after American Thanksgiving (the fourth Thursday of November), and Christmas decorations can show up even earlier in retail stores, often the day after Halloween. (With material from: Wikipedia)