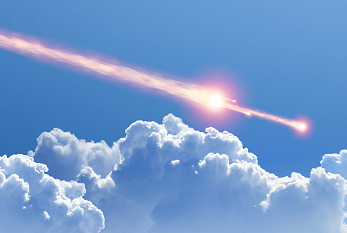 Asteroid impact against blue sky and clouds. The explosion of the Tunguska event is believed to have been caused by the air burst of a small asteroid.
Copyright: Ig0rZh, license: iStockphoto

Meteor Day is celebrated on June 30, 2023. It commemorates the Tunguska event in 1908. The Tunguska event was an enormously powerful explosion that occurred near the Podkamennaya Tunguska River at about 00:14 UT on June 30. The explosion is believed to have been caused by the air burst of a small asteroid or comet at an altitude of 5–10 kilometres (3–6 mi) above the Earth's surface. Different studies have yielded widely varying estimates of the object's size, on the order of 100 metres (330 ft). It is the largest impact event on or near Earth in recorded history.

Although the asteroid or comet appears to have burst in the air rather than hitting the surface, this event still is referred to as an impact. Estimates of the energy of the blast range from 3 to as high as 30 megatons of TNT with 10–15 megatons of TNT. This is about 1,000 times more powerful than the atomic bomb dropped on Hiroshima, Japan; and about two-fifths the power of the later Soviet Union's own Tsar Bomba (the largest nuclear weapon ever detonated).

The Tunguska explosion knocked down an estimated 80 million trees over an area covering 2,150 square kilometres (830 sq mi). It is estimated that the shock wave from the blast would have measured 5.0 on the Richter scale. An explosion of this magnitude is capable of destroying a large metropolitan area. This possibility has helped to spark discussion of asteroid deflection strategies. (With material from: Wikipedia)