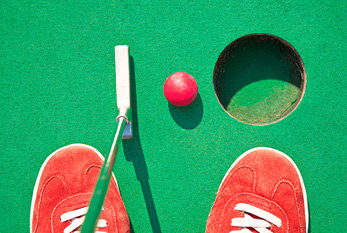 Miniature Golf Day is celebrated on September 21, 2023. Miniature golf, also known as minigolf or crazy golf, is an offshoot of the sport of golf focusing solely on the putting aspect of its parent game. It is played on courses consisting of a series of holes similar to its parent, but characterized by their short length, the use of artificial putting surfaces such as carpet, astroturf and/or concrete, a geometric layout often requiring non-traditional putting lines such as bank shots, and artificial obstacles such as tunnels/tubes, ramps, concrete/metal/fiberglass forms, and moving obstacles such as windmills.