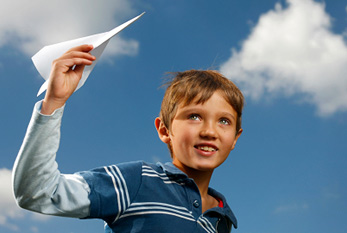 National Paper Airplane Day is observed on May 26, 2023. The day is an unofficial observance, celebrated each year in the United States to commemorate the simple aeronautical toy. Paper airplane day celebrations typically include social gatherings at which participants create and fly paper airplanes. These events often feature contests in two basic flight categories: "distance" and "time in air".

A paper airplane is a toy aircraft, usually a glider made out of paper or paperboard. The practice of constructing paper planes is sometimes referred to as aerogami, after origami, the Japanese art of paper folding. The origin of folded paper gliders is generally considered to be of Ancient China, although there is equal evidence that the refinement and development of folded gliders took place in equal measure in Japan. (With material from: Wikipedia)