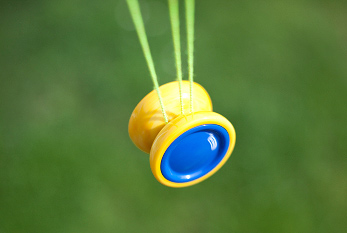 National Yo-Yo Day takes place on June 06, 2023. The yo-yo in its simplest form is an object consisting of an axle connected to two disks, and a length of twine looped around the axle, similar to a slender spool. It is played by holding the free end of the string allowing gravity or the force of a throw to spin the yo-yo and unwind the string , then allowing the yo-yo to wind itself back to one's hand, exploiting its spin. This is often called "yo-yoing".

First made popular in the 1920s, yo-yoing remains a popular pastime of many generations and cultures. It was first invented in ancient Greece. The modern yo-yo was born in 1928, when Pedro Flores opened the Yo-yo Manufacturing Company in Santa Barbara, California. Shortly thereafter (ca. 1929), an entrepreneur named Donald F. Duncan recognized the potential of this new fad and purchased the Flores Yo-yo Corporation and all its assets which was transferred to the new company in 1932 - the same year that the name "Yo-yo" was first registered as a trademark.

Duncan is most commonly associated with the Yo-Yo, the commercial success and iconic status they enjoyed during the 20th century in the United States and the world being largely the result of his marketing efforts. Duncan was born on June 6, 1892 - that's why National Yo-Yo Day takes place on June 6. (With material from: Wikipedia)