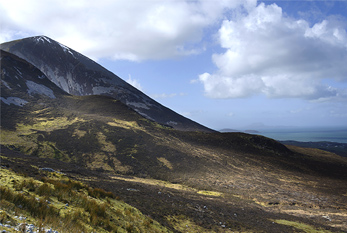 Reek Sunday is celebrated on July 30, 2023. Reek Sunday (or Garland Sunday) is an annually pilgrimage in Ireland. On the last Sunday in July, pilgrims climb Ireland's "holiest mountain", Croagh Patrick (Cruach Phádraig) in County Mayo, traditionally in their bare feet. The pilgrimage has been held yearly for about 1,500 years. It is held in honour of Saint Patrick who, according to tradition, spent 40 days fasting on the mountain in the year 441, following Jesus and Moses.

In reality, the modern pilgrimage is a long-Christianised variation of a ritual that dates back to pre-Christian, pagan Celtic Ireland, celebrating the festival of Lughnasadh. Pilgrims come from as far as Australia, Europe the United Kingdom and United States to complete the climb. Approximately 20,000–30,000 pilgrims participate on the day, compared to an annual climbing total of more than 100,000. (With material from: Wikipedia)