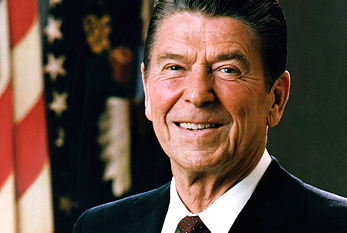 Reagan left office in 1989. In 1994, the former president disclosed that he had been diagnosed with Alzheimer's disease earlier in the year; he died ten years later at the age of 93. A conservative icon, he ranks highly in public opinion polls of U.S. Presidents and is credited for generating an ideological renaissance on the American political right. (With material from: Wikipedia)