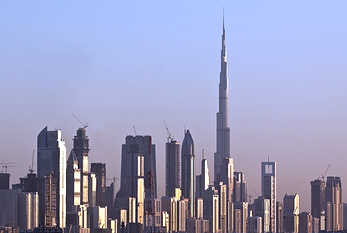 Skyscraper Day takes place on September 03, 2023. It is on September 3rd because that is Louis H. Sullivan's birthday (1856), the architect credited with the first skyscrapers. Because of Sullivan's remarkable accomplishments in design and construction at such a critical point in architectural history, he has sometimes been described as the "father" of the American skyscraper. In truth, many architects had been building skyscrapers before or contemporarily with Sullivan.

A skyscraper is a tall, continuously habitable building of many storeys, usually designed for office and commercial use. There is no official definition or height above which a building may be classified as a skyscraper. One common feature of skyscrapers is having a steel framework that supports curtain walls.

Today, skyscrapers are an increasingly common sight where land is expensive, as in the centres of big cities, because they provide such a high ratio of rentable floor space per unit area of land. They are built not just for economy of space; like temples and palaces of the past, skyscrapers are considered symbols of a city's economic power. Not only do they define the skyline, they help to define the city's identity. In some cases, exceptionally tall skyscrapers have been built not out of necessity, but to help define the city's identity and presence or power as a city. (With material from: Wikipedia)