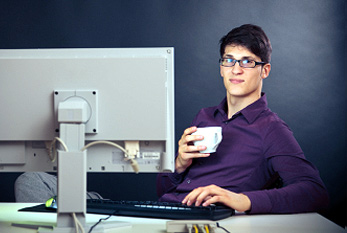 A system administrator at his workplace.
Copyright: nullplus, license: iStockphoto

The System Administrator Appreciation Day, also known as Sysadmin Day, SysAdminDay, SAD or SAAD takes place on July 28, 2023. It is a day to show appreciation for the work of sysadmins and other IT-workers. The day is celebrated annually on the last Friday in July. The Day was created by system administrator Ted Kekatos.

Ted Kekatos was inspired to create the special day by a Hewlett-Packard magazine advertisement in which a system administrator is presented with flowers and fruit-baskets by grateful co-workers as thanks for installing new printers. Kekatos had just installed several of the same model printer at his workplace. Many geek and Internet culture businesses also honor the holiday with special product offerings and contests. Various filk songs have been written to commemorate the day. The songs have reached a level of popularity where they are also covered by other performers.