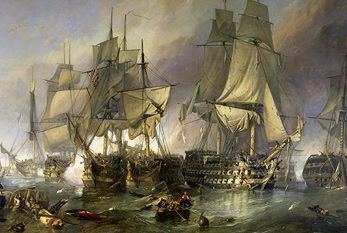 Painting of the Battle of Trafalgar
Copyright: William Clarkson Stanfield

Trafalgar Day is observed on October 21, 2021. Trafalgar Day is the celebration of the victory won by the Royal Navy, commanded by Vice-Admiral Horatio Nelson, over the combined French and Spanish fleets at the Battle of Trafalgar on 21 October 1805.

The formation of the Navy League in 1894 gave added impetus to the movement to recognise Nelson's legacy, and grand celebrations were held in Trafalgar Square on Trafalgar Day, 1896. It was widely commemorated by parades, dinners and other events throughout much of the British Empire in the 19th century and early 20th century. It is still widely celebrated in navies of the Commonwealth of Nations. (With material from: Wikipedia)