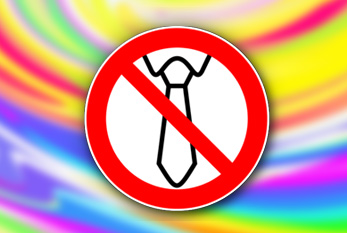 Do not wear ties: if you wear a tie on a woman's carnival, you must be afraid of scissors.
Collage: cute-calendar.com

Weiberfastnacht takes place on February 24, 2022. Weiberfastnacht is a very popular day for women in Germany during the carnival season. Among other established customs, on that day women cut off the ties of men, which are seen as a symbol of men's status. The men wear the stumps of their ties and get a little kiss as compensation. Depending on the region, the day is also known as a "Fat Thursday", which refers to the consumption of fatty foods at carnival. Weiberdonnnerstag marks the start of the street carnival and always takes place on Thursday before Ash Wednesday.

Throughout the Rhineland, Weiberfastnacht is considered an unofficial holiday, so that many offices no longer work at noon and many shops have closed. The carnival parties usually begin at 11:11 am. In contrast to Shrove Monday and the other carnival days, there are usually no processions on Weiberfastnacht. Instead, the costumes are worn - mainly by women - in pubs, bars and on the streets. It is customary for women to cut men's ties off on Thursdays as a symbol of male power. Men who fall victim to this custom are obliged not to remove the tie stump afterwards. In return, after this disempowerment, they receive a "Bützchen" (Cologne dialect for "kiss") from the women they meet. But beware: If the tie wearer has not agreed to the cut, there may be an infringement of property. Not everyone who wears a tie at Shrovetide is also immediately jeckisch and benevolent on the way.

The Weiberfastnacht is often associated with the Beuel washerwomen and the first official and male street carnival of 1823, although the day can be traced back to the 14th century. Already at that time the wives of highly respected families met on this day to celebrate and "chat" together. In the 18th century, the Weiberdonnnerstag finally became known as Pfaffenfastnacht, which was also celebrated by nuns. Due to the street carnival dominated by men, the retarded women got together and founded the Beueler Damenkomitee in the following year, to which only married women were allowed to join. Already at this time the men were to be publicly rebuked for their everyday misconduct at the women's carnival. The celebrating women also refused to wash their laundry at women's carnival.