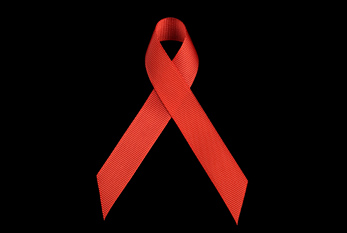 The Red Ribbon is the symbol of solidarity with people living with HIV and AIDS.
Author: Gary Woodard, License: iStockphoto

World AIDS Day, observed December 1 each year, is dedicated to raising awareness of the AIDS pandemic caused by the spread of HIV infection. It is common to hold memorials to honor persons who have died from HIV/AIDS on this day. Government and health officials also observe the event, often with speeches or forums on the AIDS topics. Since 1995, the President of the United States has made an official proclamation on World AIDS Day. Governments of other nations have followed suit and issued similar announcements.

AIDS has killed more than 25 million people between 1981 and 2007, and an estimated 33.2 million people worldwide live with HIV as of 2007, making it one of the most destructive epidemics in recorded history. Despite recent, improved access to antiretroviral treatment and care in many regions of the world, the AIDS epidemic claimed an estimated 2 million lives in 2007, of which about 270,000 were children.

World AIDS Day was first conceived in August 1987 by James W. Bunn and Thomas Netter, two public information officers for the Global Programme on AIDS at the World Health Organization in Geneva, Switzerland. Bunn and Netter took their idea to Dr. Jonathan Mann, Director of the Global Programme on AIDS (now known as UNAIDS). Dr. Mann liked the concept, approved it, and agreed with the recommendation that the first observance of World AIDS Day should be 1 December, 1988. (From: Wikipedia)