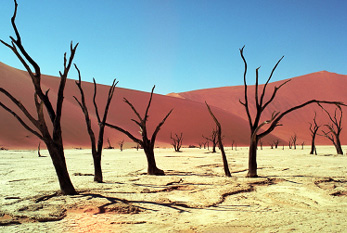 Desertification is a type of land degradation in which a relatively dry land region becomes increasingly arid, typically losing its bodies of water as well as vegetation and wildlife. It is caused by a variety of factors, such as climate change and human activities. Desertification is a significant global ecological and environmental problem.

Techniques exist for mitigating or reversing the effects of desertification, however there are numerous barriers to their implementation. One of these is that the costs of adopting sustainable agricultural practices sometimes exceed the benefits for individual farmers, even while they are socially and environmentally beneficial.[citation needed] Another issue is a lack of political will, and lack of funding to support land reclamation and anti-desertification programs. (With material from: Wikipedia)