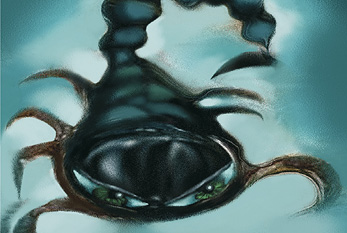 Artistic representation of the zodiac sign Scorpio in the form of a scorpion.
Copyright: Igor Zakowski, license: Fotolia.com

The Sun enters the Zodiac sign Scorpio at October 24, 2022 and leaves it on November 22, 2022. Scorpio is the eighth astrological sign in the Zodiac, which spans the zodiac between the 210th and 239th degree of celestial longitude. Individuals born during these dates, whilst the Sun is within this sign are called Scorpios. According to astrologer Alan Leo, People born with the sun in Scorpio are very determined, reserved, tenacious and secretive. Hey says, that "they are firm and somewhat proud, and capable of unmistakable traits of character that cause them to be either very much liked or very much disliked.

Their somewhat suspicious nature causes them to be distrustful, but amidst all their apparent evil traits of character, they have that grit and backbone which enables them to make higher attainments than those born in the other signs. [...] The Scorpio desires are potent and charged with the power to attain the object of their desires; but when their desires are subservient to the will, there are none more powerful or determined. In conclusion, it may be said that the Scorpio individuals that they have reached the point that they decide their own future progress."

In Synastry, the natives of Scorpio are generally considered to be most compatible with the natives of the other water signs, Cancer and Pisces. and to a lesser extent with Taurus, Virgo, Capricorn. However, compatibility based on sun-sign alone is considered to be only a very general guideline. The branch of astrology dealing with interpersonal relationships is called Synastry. In this, astrologers analyse the horoscopes of both parties being considered with particular reference to the positions of the Sun and Moon and Mars and Venus. (With material from: Wikipedia)

Other features of the Scorpio horoscope: