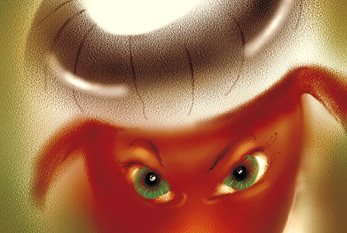 The Sun enters the Zodiac sign Taurus at April 21, 2022 and leaves it on May 20, 2022. Individuals born during these dates, whilst the Sun is within this sign are called Taureans. Taurus is the second astrological sign in the Zodiac, which spans the zodiac between the 30th and 59th degree of celestial longitude.

Taurus has been seasonally associated with the flourish of spring, when the Earth is green and fresh. Because the season has settled, astrologers call it a fixed sign, indicating stability, resistance to change, and the ability to 'enjoy the people'. According to astrologers the sign is governed by Venus, the planet of art, procreation and indulgence, which adds the traits of creativity, sensuality, and appreciation of life's material luxuries. The moon is also associated with this sign, which it governs by exaltation. The lunar-association is considered to denote emotional depth and highlights further the fertility significations of Venus and this, the 'earth-sign' of spring.

Astrologers classify Taurus as a negative or passive (introvert) sign. This gives the characteristics of being reflective, receptive to the ideas of others: typically, a 'thinker' rather than a 'doer'. But being of the earth-triplicity, Taurus is considered by astrologers to be a highly practical sign which is happiest when involved in some kind of creative process. Although generally considered easy-going and placid, as a fixed sign Taurus is renowned for being stubborn. Taureans are likened to the bull in being slow to show anger, but capable of raging if pushed too far. It is also said Taureans enjoy basic 'creative comforts' and don't allow others to disturb them easily, but they are slow to forgive when this happens.

Generally, the qualities of Taurus are considered to be compatible with those of the other earth signs: Virgo and Capricorn, and to a lesser extent with the water signs: Cancer, Scorpio and Pisces. However, compatibility based on sun-sign alone is considered to be only a very general guideline. The branch of astrology dealing with interpersonal relationships is called Synastry. In this, astrologers analyse the horoscopes of both parties being considered with particular reference to the positions of the Sun and Moon, and Venus and Mars. (With material from: Wikipedia)

Other features of the Taurus horoscope: