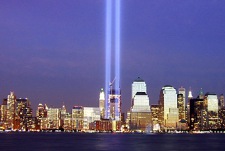 Significance: Patriot Day was designated in memory of the 2,977 killed in the September 11, 2001 terrorist attacks. The Twin Towers of the World Trade Center collapsed after two passenger airliners, hijacked by al-Qaeda terrorists, were crashed into them.

Patriot Day in other languages