Information about Opposite Day 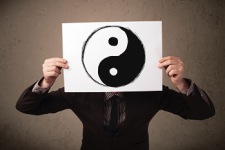 Man holding a yin-yang symbol in front of his head. Ying and Yang is used to describe how seemingly opposite or contrary forces are interconnected.

Opposite Day in other languages