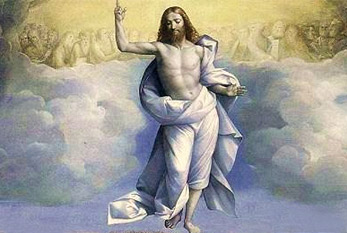 The feast Ascension of Jesus is celebrated in 2023 on May 18. The Ascension of Jesus is the Christian doctrine from the New Testament of the moment when the resurrected Jesus was taken up to heaven in his resurrection body, in the presence of eleven of his Apostles. According to the doctrine, he was returning to his Father and his heavenly throne, and now sits at the right hand of God the Father in heaven. An angel told the watching disciples that Jesus' second coming would take place in the same manner as his ascension. Jesus died circa 30 by Crucifixion at the hands of the Romans.