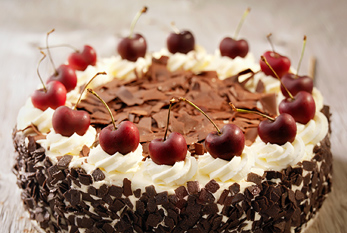 A traditional black forest cake is made of three chocolate cake plates with shipped cream and cherries in between. On its top and on the sides it is also decorated with more whipped cream and cherries. In Germany, there is most often the black Forest cherry liquor added, but in other countries the cake normally comes along without any alcohol. If that clear strong liquor from the Black Forest is missing, the torte may not be called by its German name. However, with or without the cherry liquor this torte is worth a delicious sin on Black Forest Cake Day!