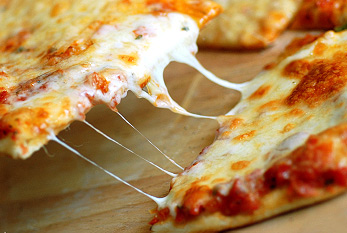 Cheese Pizza Day is celebrated on September 05, 2023. The modern pizza was originally invented in Naples, Italy, and the dish has since become popular in many parts of the world. The original pizza use only mozzarella, the highest quality ones the buffalo mozzarella variant, produced in the surroundings of Neaples.

Other kind of cheese can be used for creative alternative receipts, including processed cheeses for mass-market pizzas manufactured to produce preferable qualities like browning, melting, stretchiness and fat and moisture content.

Many studies and experiments have analyzed the impact of vegetable oil, manufacturing and culture processes, denatured whey proteins and other changes to creating the ideal and economical pizza cheese. In 1997 it was estimated that annual production of pizza cheese was 2 billion pounds in the U.S. and 200 million pounds in Europe. (With material from: Wikipedia)