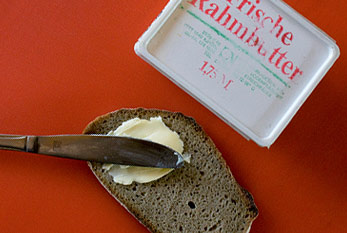 Apart from the literal meaning of Butterbrot, the term is in Germany often referring to any kind of bread with any kind of topping. The central European country is famous for its large bakery traditions. They have the most variety in bread and the most popular topping still is butter, which is a very common basic for any kind of sandwich, made in Germany. Although the production of bread even in Germany is pretty much industrialized already, there are still many smaller bakeries left, who have their own oven and own recipes for their own bread dough.

White bread, buns and rolls are not so popular in Germany than in many other countries. In Germany you would rather find farmhouse bread, coarse rye bread, wholemeal bread and many more. Use the Day of German Butterbrot to try the taste of a real, rich German Butterbrot and stay away from sandwiches. This day might also be a good opportunity to find some German recipes for bread dough and try it at home. It is easier than you think and you will be surprised how tasty bread can be. Also your friends and colleagues will be glad if you share yourself made German Butterbrot with them.