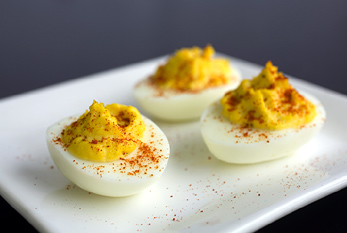 Deviled Egg Day is observed on November 02, 2023. Deviled eggs, devilled eggs or 'eggs mimosa' are hard-boiled eggs, shelled, cut in half and filled with the hard-boiled egg's yolk mixed with other ingredients such as mayonnaise and mustard, but many other variants exist internationally. Deviled eggs are usually served cold. They are served as a side dish, appetizer or a main course, and are a common holiday or party food.

The deviled egg can be seen in recipes as far back as ancient Rome. It is still popular across the continent of Europe. In many European countries, especially Belgium, France, the Netherlands and Germany, a variation is served known as "Russian eggs". This consists of eggs cut in half, served with vegetable macédoine and garnished with mayonnaise, parsley and tomato.