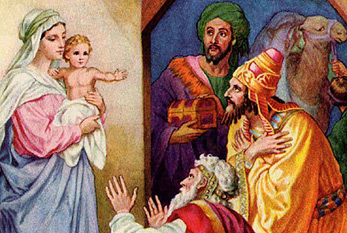 Epiphany is a Christian feast day that celebrates the revelation of God the Son as a human being in Jesus Christ. It falls on January 6 or, in many countries, on the Sunday that falls between January 2 and January 8. Since the Julian Calendar, which is followed by some Eastern Churches, is at present 13 days behind the Gregorian Calendar and the revised Julian Calendar, 6 January in that calendar corresponds at present to 19 January in what is the official civil calendar in most countries.

In Christian tradition, the Magi, also referred to as the (Three) Wise Men, (Three) Kings, or Kings from the East, are a group of distinguished foreigners who are said to have visited Jesus after his birth, bearing gifts of gold, myrrh and frankincense. They are regular figures in traditional accounts of the nativity and in celebrations of Christmas. Magi is a term derived from Greek meaning a priest of Zoroaster. (From: Wikipedia, License: CCA-SA)