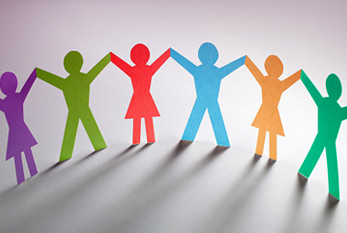 Chain of people as a symbol for Co-operatives.
Copyright: malerapaso, license: iStockphoto

Since 1995 the United Nations' International Day of Co-operatives has been observed jointly alongside International Co-operative Day. Co-operatives around the world celebrate the day in various fashions and each year the organising institutions agree on a theme for the celebrations. The 2010 theme was Cooperative Enterprise Empowers Women, to coincide with the 15th anniversary of the Beijing Platform for Action.

A cooperative ("coop") or co-operative is an autonomous association of persons who voluntarily cooperate for their mutual, social, economic, and cultural benefit. The cooperative movement has been fueled globally by ideas of economic democracy. In the United States, the National Cooperative Business Association serves as the sector's national membership association. It is dedicated to ensuring that cooperative businesses have the same opportunities as other businesses operating the country and that consumers have access to cooperatives in the marketplace. (With material from: Wikipedia)