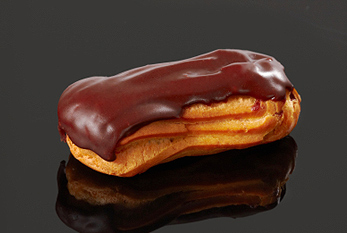 National Chocolate Eclair Day takes place on June 22, 2023. An chocolate éclair is an oblong pastry made with choux dough filled with a cream and topped with chocolate icing.

The dough, which is the same as that used for profiterole, is typically piped into an oblong shape with a pastry bag and baked until it is crisp and hollow inside. Once cool, the pastry then is filled with a vanilla-, coffee- or chocolate-flavoured custard, or with whipped cream, or chiboust cream; and then iced with fondant icing.

The éclair originated during the nineteenth century in France. It is a popular type of cake served all over the world. The word is first attested both in English and in French in the 1860s. (With material from: Wikipedia)