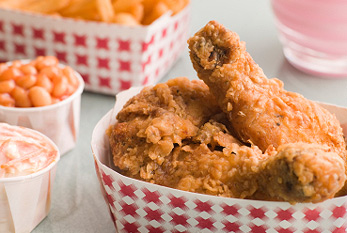 National Fried Chicken Day takes place on July 06, 2023. Fried chicken - also referred to as Southern fried chicken - is a dish consisting of chicken pieces usually from broiler chickens which have been floured or battered and then pan-fried, deep fried, or pressure fried. The breading adds a crisp coating or crust to the exterior. What separates fried chicken from other fried forms of chicken is that generally the chicken is cut at the joints and the bones and skin are left intact. Crisp well-seasoned skin, rendered of excess fat, is a hallmark of well made fried chicken.