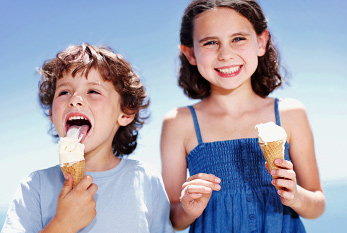 A boy and his sister enjoying their ice cream outside.
Copyright: Squaredpixels, license: iStockphoto

National Ice Cream Day is observed on July 17, 2022. Ice cream is a frozen dessert usually made from dairy products, such as milk and cream and often combined with fruits or other ingredients and flavours. Most varieties contain sugar, although some are made with other sweeteners. In some cases, artificial flavourings and colourings are used in addition to, or instead of, the natural ingredients.

Ice cream is an extremely popular dessert in the United States. Americans consume about 13 liters of ice cream per person per year - the most in the world. As a foodstuff it is deeply ingrained into the American psyche and has been available in America since its founding in 1776: there are records of Thomas Jefferson serving it as a then-expensive treat to guests at his home in Monticello. In American supermarkets it is not uncommon for ice cream and related products to take up a wall full of freezers.

In the United States, ice cream made with just cream, sugar, and a flavouring is sometimes referred to as "Philadelphia style" ice cream. Although chocolate, vanilla, and strawberry are the traditional favorite flavors of ice cream, and once enjoyed roughly equal popularity, vanilla has grown to be far and away the most popular, most likely because of its use as a topping for fruit based pies and its use as the key ingredient for milkshakes. (With material from: Wikipedia)