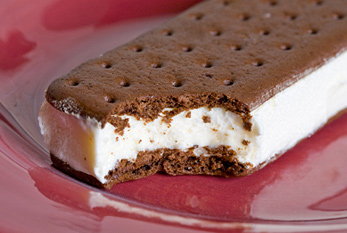 Alternatives to wafers are often used, such as chocolate chip cookies, which are used by Chipwich, for example. Many companies offer alternatives to the conventional ice cream sandwich as well, such as San Francisco's It's-It, that uses oatmeal cookies and dips the sandwich in dark chocolate.

In North America, an ice cream sandwich is a slice of ice cream, commonly vanilla although other flavors are sometimes used, sandwiched between two wafers, usually chocolate and rectangular. The current version was invented in 1945 by Jerry Newberg when he was selling ice cream at Forbes Field. (With material from: Wikipedia)