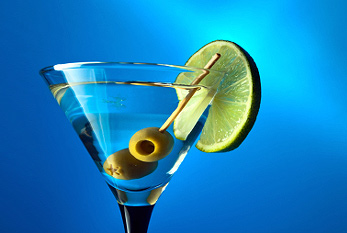 Martini in a cocktail glass with an olive.
Copyright: igorr1, license: iStockphoto.com

National Martini Day takes place on June 19, 2021. The martini is a cocktail made with gin and vermouth, and garnished with an olive or a lemon twist. Over the years, the martini has become one of the best-known mixed alcoholic beverages. H. L. Mencken called the martini "the only American invention as perfect as the sonnet" and E. B. White called it "the elixir of quietude".

The traditional method of preparation is to pour gin and dry vermouth into a mixing glass with ice cubes, stir, strain into chilled cocktail glass, and garnish with a green olive or a twist of lemon peel. The ratio of gin to vermouth has been steadily increasing since the cocktail was created. During the latter part of the 20th century, 6:1, 8:1, 12:1, or even 50:1 or 100:1 martinis became considered the norm.

You need to prepare a martini? No problem, here is what you need to do to serve a straight Martini: Pour all ingredients (55ml gin and 15ml dry vermouth) into a mixing glass with ice cubes. Stir well. Strain in chilled martini cocktail glass. Squeeze oil from lemon peel onto the drink, or garnish with olive. To serve it on the rocks: Pour all ingredients over ice cubes in old-fashioned glass and garnish as above. (With material from: Wikipedia)