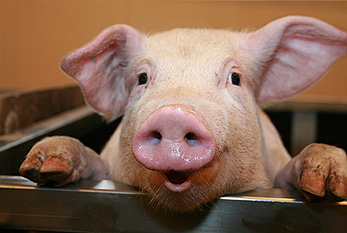 National Pig Day is observed on March 01, 2023. National Pig Day is an event held annually in the United States to celebrate the pig. The holiday celebration was started in 1972 by sisters Ellen Stanley, a teacher in Lubbock, Texas, and Mary Lynne Rave of Beaufort, North Carolina. According to Rave the purpose of National Pig Day is "to accord the pig its rightful, though generally unrecognized, place as one of man's most intellectual and domesticated animals." The holiday is most often celebrated in the Midwest.

National Pig Day includes events at zoos, schools, nursing homes, and sporting events around the United States. It is also recognized at "pig parties" where pink pig punch and pork delicacies are served, and pink ribbon pigtails are tied around trees in the pigs' honor. The question of whether the holiday is a time to honor pigs by "giving them a break" or to appreciate their offerings (spare ribs, bacon and ham) is an open question. (With material from: Wikipedia)