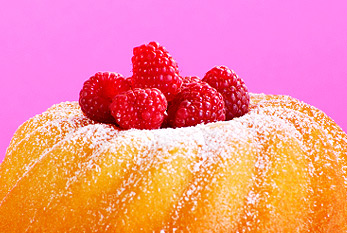 National Raspberry Cake Day is observed on July 19, 2022. Raspberry pie is pie composed of raspberry filling or topping, usually in the form of either raspberry jam, actual raspberries themselves, or some combination thereof. Raspberries can be stewed or soaked in water prior to baking to prevent burning.

The raspberry is the edible fruit of a multitude of plant species in the genus Rubus of the rose family, most of which are in the subgenus Idaeobatus; the name also applies to these plants themselves. Raspberries are perennial with woody stems.

Raspberries are an important commercial fruit crop, widely grown in all temperate regions of the World. Traditionally, raspberries were a midsummer crop, but with new technology, cultivars, and transportation, they can now be obtained year-round. Raspberries need ample sun and water for optimal development. (With material from: Wikipedia)