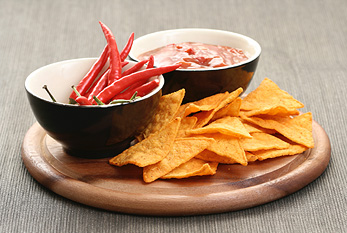 National Tortilla Chip Day is celebrated on February 24, 2023. A tortilla chip is a snack food made from corn tortillas, which are cut into wedges and then fried. Alternatively they may be discs pressed out of corn masa then fried or baked. Corn tortillas are made of corn, vegetable oil, salt and water.

Tortilla chips are the quintessential and often complimentary appetizer in Tex-Mex and Mexican restaurants in the U.S. and elsewhere. Although first mass-produced in Los Angeles in the late 1940s, tortilla chips were always considered to be a Mexican food, known as tostados. Though usually made of yellow corn, they can also be made of white, blue, or red corn. Some manufacturers include many other ingredients including wheat, sugar, and MSG.

The triangle shaped tortilla chip was popularized by Rebecca Webb Carranza as a way to make use of misshapen tortillas rejected from the automated tortilla manufacturing machine that she and her husband used at their Mexican delicatessen and tortilla factory in southwest Los Angeles. Carranza found that the discarded tortillas, cut into triangles and fried, were a popular snack. (With material from: Wikipedia)