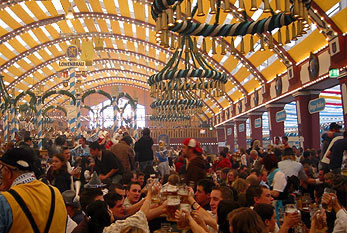 The Munich Oktoberfest takes place between 22. September 2018 bis zum 07. October 2018. It is the largest Volksfest In the world, held annually since 1810 from mid or late September until the first weekend in October in Germany. Each year more than six million people visit Munich, Bavaria to attend the people’s fair, which is also known as Wiesn. About 15 percent of all visitors come from out of state. The event takes place on the 42 hectare Theresienwiese and usually lasts for 16 days. Only if day 16 falls before October 3 (German Unity Day), the festival continues until the national holiday.

Only beer brewed within the city limits of Munich, and conforming to the Reinheitsgebot, which contains regulations limiting the ingredients in beer, can be served at the Munich Oktoberfest. The beer consumed at the Oktoberfest in Munich is a special brew, which is stronger than the standard brew and has an alcohol volume of up to six percent. The fair’s power consumption totals about 13% of the daily electrical needs of Munich (about 2.7 million kilowatt hours). Cities around the globe today held Oktoberfest celebrations, which usually are a mixture of beer festivals and funfairs.

Where is Oktoberfest?
Theresienwiese
80339 Munich (Germany)
When is Oktoberfest?
Saturday, the 22nd of September 2018 to Sunday, the 7th of October 2018
Over since 1575 days!
The next feasts and holidays