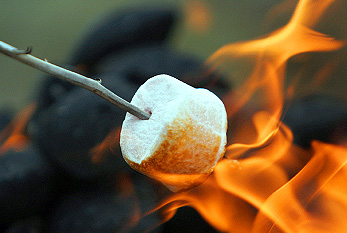 Toasted Marshmallow Day takes place on August 30, 2023. A popular camping or backyard tradition in North America and Australia is the roasting or toasting of marshmallows over a campfire or other open flame. A marshmallow is placed on the end of a stick or skewer and held carefully over the fire. This creates a caramelized outer skin with a liquid, molten layer underneath.