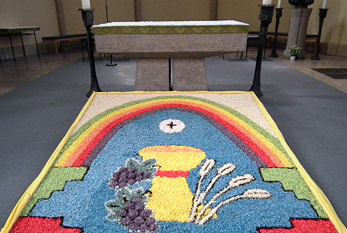 Corpus Christi is a Western Catholic feast which takes place on June 08, 2023. It is also celebrated in some Anglican and Lutheran churches. It honors the Eucharist, and as such it does not commemorate a particular event in Jesus' life. It is held on the Thursday after Trinity Sunday or, in some places, on the following Sunday. Its celebration on a Thursday is meant to associate it with institution by Jesus of the Eucharist during the Last Supper, commemorated on Maundy Thursday, and this is the first free Thursday after Paschaltide. In the current Ordinary form of the Roman rite of the Catholic Church, the feast is officially known as the Solemnity of the Most Holy Body and Blood of Christ.