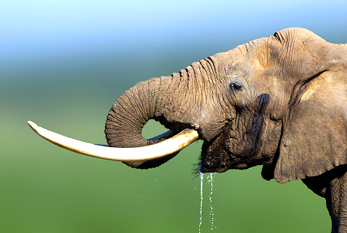 Elephant Appreciation Day is celebrated on September 22, 2022. Elephants are large mammals of the family Elephantidae. Elephants are scattered throughout sub-Saharan Africa, and South and Southeast Asia. The largest living terrestrial animals, male African elephants can reach a height of 4 m (13 ft) and weigh 7,000 kg (15,000 lb). These animals have several distinctive features, including a long proboscis or trunk used for many purposes, particularly for grasping objects.

African elephants are listed as vulnerable by the International Union for Conservation of Nature (IUCN), while the Asian elephant is classed as endangered. One of the biggest threats to elephant populations is the ivory trade, as the animals are poached for their ivory tusks. Other threats to wild elephants include habitat destruction and conflicts with local people. Elephants are used as working animals in Asia. In the past they were used in war; today, they are often put on display in zoos and circuses. Elephants are highly recognisable and have been featured in art, folklore, religion, literature and popular culture.

Elephants exhibit mirror self-recognition, an indication of self-awareness and cognition that has also been demonstrated in some apes and dolphins. Elephants are popularly thought of as having an excellent memory. This could have a factual basis; they possibly have cognitive maps to allow them to remember large-scale spaces over long periods of time. Individuals appear to be able to keep track of the current location of their family members. Scientists debate the extent to which elephants feel emotion. They appear to show interest in the bones of their own kind, regardless of whether they are related. (With material from: Wikipedia)