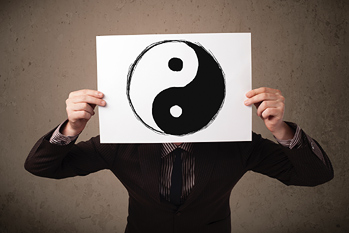 Man holding a yin-yang symbol in front of his head. Ying and Yang is used to describe how seemingly opposite or contrary forces are interconnected.
Copyright: ra2studio, license: iStockphoto

Opposite Day is observed on January 25, 2024, where speech is modified so that meaning is inverted. Once Opposite Day is declared, statements mean the opposite of what they usually mean. If you say yes, it means no. If you say bright, you mean dark. And so on ... Opposite Day can also be declared retroactively to indicate that what was just asserted had the opposite meaning of what was originally intended (similar to the practice of crossed fingers to automatically nullify promises).

In lexical semantics, opposites are words that lie in an inherently incompatible binary relationship as in the opposite pairs male : female, long : short, and precede : follow. The notion of incompatibility here refers to the fact that one word in an opposite pair entails that it is not the other pair member. For example, something that is long entails that it is not short.

Opposites are simultaneously different and similar in meaning. Typically, they differ in only one dimension of meaning, but are similar in most other respects, including similarity in grammar and positions of semantic abnormality. Additionally, not all words have an opposite. Some words are non-opposable. For example, animal or plant species have no binary opposite. (With material from: Wikipedia)