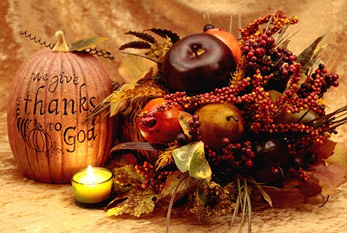 It also is a Thanksgiving tradition to begin the Thanksgiving dinner by saying a prayer. Also various religious and spiritual organizations offer services and events on Thanksgiving. In New York City (Manhattan), the Macy's Thanksgiving Day Parade is held annually. This huge celebration is televised nationally and features popular large balloons of cartoon characters and TV personalities. The Santa Claus float traditionally ends the Thanksgiving Parade, as this holiday is unofficially the sign for the beginning of the Christmas season. On Black Friday, the day after Thanksgiving, people start buying their Christmas gifts.

The first Thanksgiving was celebrated to give thanks to God for helping the Pilgrims of Plymouth Colony survive the cold winter that year. The feast lasted for three days. Today many people serve mashed or sweet potatoes, cranberry sauce, sweet corn, and pumpkin pie for Thanksgiving Day. A note of the Governor of Plymouth Colony regarding the turkeys that were eaten during the very first Thanksgiving celebration, probably gave rise to the tradition of having turkey at Thanksgiving: A turkey is the featured item on nearly any Thanksgiving feast table all over the country. The day unofficially often is referred to as "Turkey Day".